According to SimilarWeb research Pokemon Go had been installed on 5% of US smartphones while Tinder installed just on 2% US devices. Pokemons are taking over the world.

Just in one week after launching of Pokemon Go and it is fast approaching the popularity of Twitter and it has double the engagement of Snapchat.

What had happened? What is Pokemon?

June 6th corporation Nintendo released the game with augmented reality Pokemon Go. It has free apps for iOS and Android. 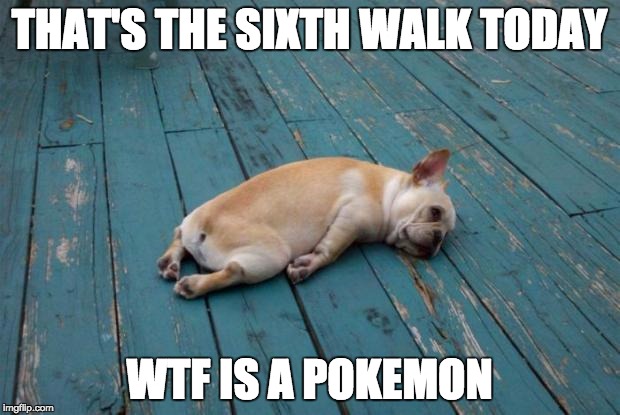 Sore legs become pandemic. People are spending so much time wandering around to catch Pokemon that getting sore legs from walking has practically become its own meme.

There are a lot of guides, tips and tricks how to hunt Pokemon. Lifehacker has released own one about safety catching Pokemon by turning your bike into a Pokemon Go machine.

Clever entrepreneurs have found out how to earn money with this skyrocket fad. Pokemon Go can drive insane amounts of sales at small, local businesses. To ambulate gamers around you into your new best customers, all you need is to know how to play the game.

The idea of Pokémon Go is to look for and catch Pokémon in the real world. Use the Internet and your GPS gadget to coordinate your movement on the map and show where nearby can be a Pokemon.

You can find them simply walking down the street or along with special points - PokeStop.You can also find additional bonuses and equipment for catching Pokemon.

Your game character moves around the map when you’re wandering. Approaching to Pokemon your gadget activates the camera and allows you to catch him throwing Pokeball.

So, figure out whether your business is a PokeStop or Gym. Such points attract foot traffic without any effort-players flock to them for rewards and to battle other players-and they can be leveraged for massive sales if you know how. To determine you can use the online map of portals created for the game Ingress, which maps virtually 1:1 with Pokemon Go’s PokeStops and Gyms.

Next, throw down a Lure. Lure - in-app purchase that increase the rate of Pokemon generation in the area around the PokeStop where they’re placed for one half hour. With $100 netting you 14,500 Pokecoins and an eight-pack of Lures costing 680 Pokecoin. For a little more than a dollar an hour, you can bring virtually guaranteed crowds to your business.

You can attract visitors via social media, just take in-game screenshots and post them with hashtags like #pokemongo and #pokemon.

Take your business on the road. Just get mobile and find a spot from which to orchestrate the Lure strategy. Move there with your business. Take advantage of places where you have clusters of PokeStops. If you have street food start-up, just move to PokeStop and organize there a barbecue. You can cooperate with other retailers and organize a joint event. Be creative.